Art has been around since the dawn of time; prehistoric cave paintings can be found in grottos and on cliffs around the world. However, intact prehistoric sculpture remains a rare find for archeologists, though not impossible. And when discovered, they provide a fascinating insight into the lives of the earliest cultures. In southwest France, a system of three large caves adjacent to the River Volp present some of the finest examples of Paleolithic art in Europe. Among the wonders of the caves is a small, complex sculpture of two bison sculpted in clay. This artwork dates back to about 13,000 BCE and offers a mysterious clue to scholars interested in early Magdalenian culture.

The River Volp flows through the foothills of the Pyrenees Mountains range which separates France and Spain. Near the commune of Montesquieu-Avantès in southwestern France, the river flows under rocks for some length. The river actually disappears into caves, which were first explored in 1912 by Henri Bégouën and his three teenage sons. The system of caverns is technically three separate caves, only two of which are connected. Called Trois-Frères (three brothers), Enlène, and Tuc d’Audoubert, the three caves contain three levels. The river flows through the lowest, while the other levels host rooms of varying sizes. It was inside Tuc d’Audoubert that the young men encountered cave walls engraved and painted with paleolithic art. Under the direction of a family friend and archeologist, Émile Cartailhac, the caves began to be researched to see what other treasures they might hold.

Careful exploration of the caves turned up hundreds of examples of artwork by the Stone Age Magdalenian peoples. These ancient humans were known to hunt reindeer, horses, and other big game during the waning of the Ice Age. Their ancient living and ritual sites have been found in France and Spain and include cave art, engraved bones, and other artifacts. The findings at the three caves added to the repertoire of ancient art attributed to the culture. In the Enlène cave, bone and ivory fragments carved with animal depictions were discovered. The craftsman chose to depict a horse’s head on a hyoid bone of a horse; a chamois (a goat-antelope creature native to the region) is also carved on the mandible bone of a bison.

The Enlène cave contained relatively few examples of wall art; however, the other two caves provide rich engraved and painted examples. At Tuc d’Audoubert cave, abstract club symbols (claviforms) shaped like the letter “P” were repeated frequently, particularly in a room which came to be known as the Gallery of the Claviforms. Throughout the cave, 103 animals are depicted on the walls and floors. These include horses, reindeer, and big cats. However, the bison seems to have been the most revered of these animals—composing a total of 40 percent of the animal depictions. In addition, 250 abstract signs and other mysterious figures have been documented by researchers returning to the cave over the decades since its discovery.

Some of the mysterious figures shown on the walls have captivated scholarly interest while their meanings remain elusive. Known as “the sorcerer,” a painting of an animal hybrid walking upright with horns is one of the most famous examples of the art within the cavern system. Found in the Trois-Frères cave, the design was initially recorded by Henri Breuil. He sketched what appears to be a man-animal mystical figure. Hence, the painting received the name “the sorcerer” as Breuil believed the design indicated a magical figure or magician. Theories abound as to the identity and importance of this figure. Given the big game depicted elsewhere on the walls, perhaps the figure was a lucky symbol for a successful hunt. Perhaps it is some mythical king of the beasts. In its unusual form and prominent position, scholars feel certain that “the sorcerer” must be an important part of Magdalenian culture and relate to the use of the caves.

Perhaps the most exciting discovery of the caverns is a small clay statue in the deepest room of the Tuc d’Audoubert cave—now known as the Room of the Bisons. Supported by a rock in the floor of the cavern is a small clay statue of two bison sculpted in relief. The work is only about 18 inches tall but remarkable for the detail with which it depicts a male and female bison who appear to be close to mating. Thier very realistic appearance was created using a combination of hand and tool. The clay used was clearly carved from the wall of an adjoining cavern. Despite the almost 15,000 years which have passed since its creation, the sculpture is still in generally good condition. This is in part due to the restricted access policy—since almost the day of its discovery—which only allows researchers to enter the caves.

While the beauty of the prehistoric bison statue is undeniable, its meaning and importance to the original inhabitants of the caves is murky. Experts suspect the bison statue had a ritualistic purpose like much of the other cave art. Certainly, bison were an important food source, and their bones are found among the other artifacts of the caves. Many representations of the beasts were found throughout including one carved on the floor near the clay statue. It seems these large beasts held an important place in Magdalenian culture.

The world of the Magdalenians who inhabited the three caves along the River Volp remains partially shrouded in the thousands of years which stretch between their lives and modern researchers. Modern science can analyze the genetics of these early humans, and archeologists can document the cave art they leave behind. However, the lives that correspond to the footprints—adults and children—which still lay lightly impressed in clay around the cave floors remain an object of fascination, investigation, and speculation.

In three caves along the River Volp in France, hundreds of examples of Paleolithic art by the Magdalenian people were discovered in the early 20th century. 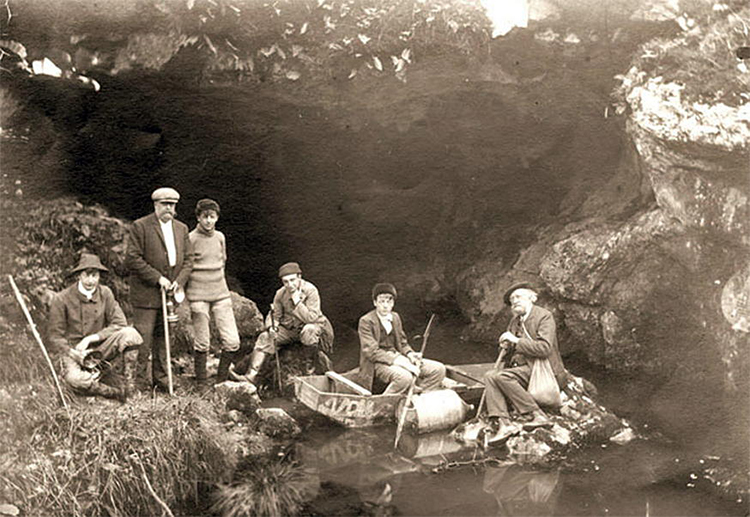 Henri Breuil, Émile Cartailhac, and Henri Bégouën and his sons in front of the entrance to the Cave of Tuc d’Audoubert in July 1912. (Photo: Wikimedia Commons [Public domain]) 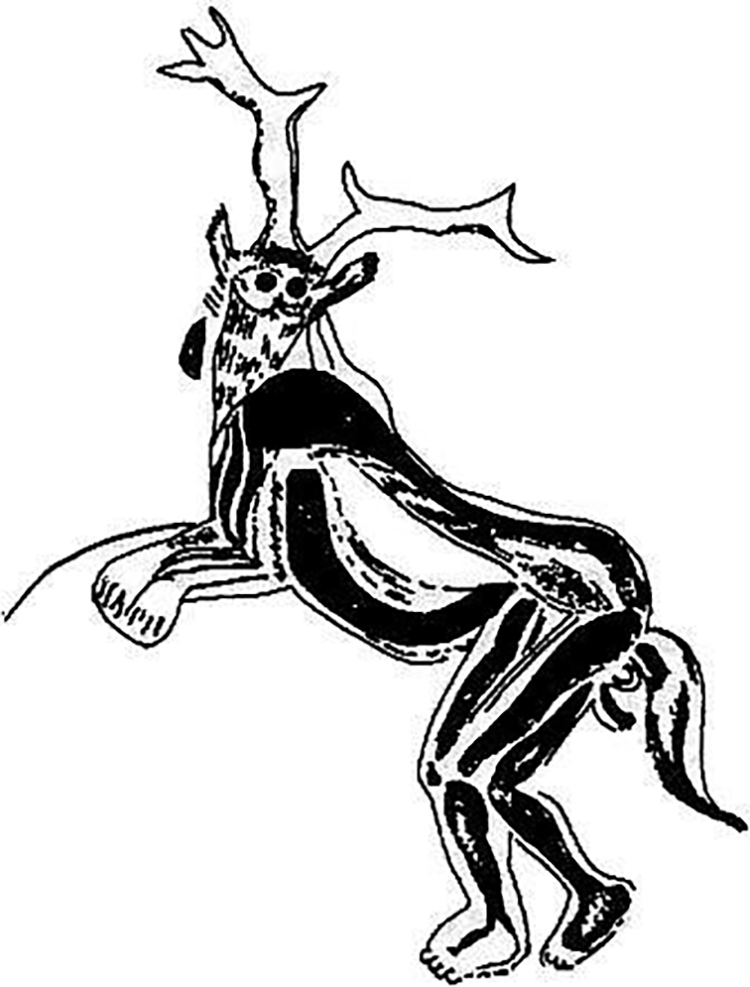 A cave painting inside the Cave of the Trois-Frères (Three Brothers), originally dubbed “the Sorcerer.” The above drawing is based on the original sketches of Henri Breuil. (Photo: Wikimedia Commons [Public domain])

Much of the meaning behind the cave art remains a mystery, but it is a window into the lives of early humans 15,000 years ago. 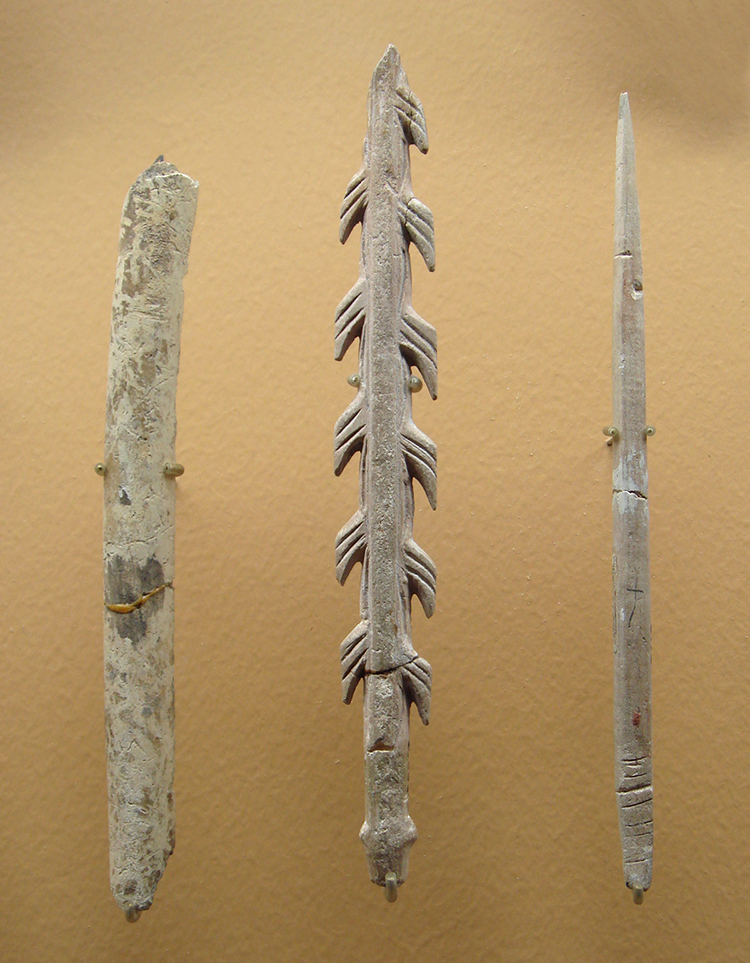 “Sistine Chapel of the Ancients”: Researchers Discover Thousands of Ice Age Rock Paintings in the Amazon

Discovery of a 9,000 Year-Old Burial of a Female Hunter Challenges Prehistoric Gender Roles

This 45,000-Year-Old Warty Pig Cave Painting May Be the Oldest Known Animal Art