An opera singer was nearly killed on a French stage in what prosecutors say was a sabotage plot connected to a feud between stage hands.

American tenor Robert Dean Smith had to roll out of the way of a 467lbs boulder which was supposed to be suspended by cables two feet above him, but failed to come to a stop as planned.

It caused the audience to burst into laughter as his character was supposed to be dead, with the boulder symbolising his character’s gravestone in the Richard Wagner opera.

But the incident – which saw the huge rock fall to within four inches of the stage before someone triggered an emergency brake – prompted a six-year police investigation which has led to charges against a stage hand called Nicolas S.

Prosecutors accuse him of tampering with a computer system which controlled the cables in order to discredit a colleague called Richard R – but Nicolas S denies this. 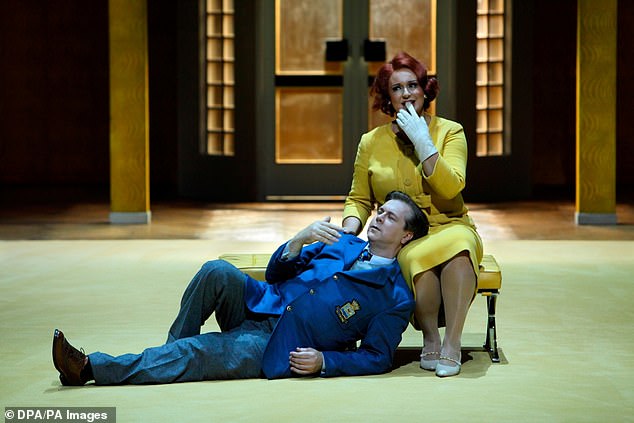 Robert Dean Smith, pictured playing the role of Tristan at the Bayreuth Festival, had to break character and take evasive action in a performance in France thanks to what prosecutors claim was a sabotage plot by a stage hand

The two stage hands were said to detest each other, with Richard R being convicted of violence against Nicolas S only months earlier, according to French media.

An investigation report describes an ‘execrable atmosphere’ on the production team in Toulouse, with police speaking of ‘hatred’ between colleagues.

On the night of the near-miss, Richard R was on duty during the premiere of the production in January 2015.

A day earlier, prosecutors allege, the computer system that controlled the cables and the 467lbs boulder had been modified at 6.19pm.

Nicolas S was identified as a suspect because of mobile phone location data showing him in the precincts of the Theatre du Capitole.

An investigation by theatre staff in Toulouse found no technical failure with the cable equipment.

Nicolas S is alleged to have altered the settings so that Richard R would be blamed for the problem – but the suspect denies wrongdoing.

His lawyers have provided a supermarket receipt claiming to show he was seven miles away later on the same evening – but police say he would have had time to get there from the theatre.

Prosecutors claim that Nicolas S altered the settings so that Richard R would be blamed.

The lengthy investigation did not find reason to believe that anyone was targeting Robert Dean Smith, but Nicolas S faces charges of ‘obstructing the operation of an automated data system’ and ‘fraudulent modification of data’.

He faces five years in prison and a €150,000 fine if found guilty, French media says -but denies that it was him who changed the computer settings.

Having just won a conviction in the case against Richard R, Nicolas S would have had no motive to take additional revenge, his lawyers claim.

‘If somebody would have wanted revenge, it wasn’t him – he had just won the case,’ they told Le Parisien.

‘The guilt of Nicolas S is not established,’ they said, adding that there were ‘other hypotheses’ and accusing the police of ignoring other suspects. 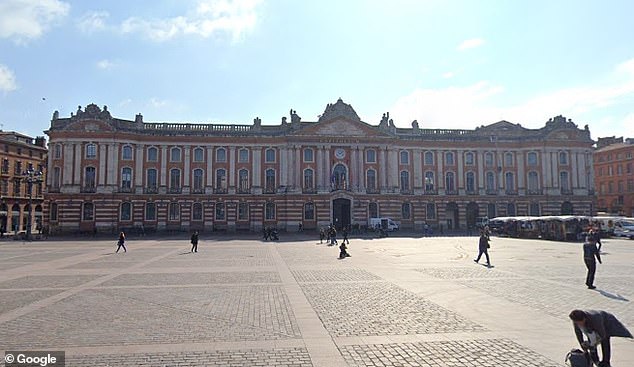 They added that he had continued to work in theatre productions in another Toulouse venue, suggesting he was trusted by his employers.

Robert Dean Smith has not taken part in the legal proceedings, and will not be present at the stage hand’s trial.

The American-Swiss singer is especially known for portraying Wagnerian heroes and has taken part in the Bayreuth Festival in the German composer’s home town.

In the French production he was playing Tristan, who is meant to be lying dead while Isolde sings over his body – with the suspended rock representing his gravestone.

One of the defence lawyers, Alexander Martin, told France Bleu radio that the audience was ‘dumbfounded’ by the falling rock incident because it changed the end of the story’.

‘Tristan should have died under a rock and the tenor avoids it by doing a swift roll,’ he said.

Isolde herself then dies at the climax of the three-act opera, which was written in 1865 and first performed in Munich.

The story derives from a Celtic legend, also known as Tristram and Iseult, which was handed down the generations and appears in medieval texts.