Background: The main title opening sequence for the HBO Max drama The Staircase provides a tonal, thematic segue for viewers into the world of the show, which follows the true crime story of a writer convicted of murdering his wife. Director Antonio Campos felt it was important for the titles to establish a sense of the complexity within the interpersonal relationships of the characters and the ambiguity of the overall perspective. The show plays with the question of “Did he do it?” through the impact of characters’ points of view and internal motivations. The title sequence needed to find ways to build that feeling of dislocation and uncertainty while alluding to the interconnections between people.

Design thinking: We wanted to convey the unexpected, even in the relatively mundane. Constructing a space out of glass enabled us to explore the feeling of looking in on moments in people’s lives and also to obscure, withhold and trick viewers. Both the material and the structure take on multiple identities and meanings throughout the sequence, sometimes behaving as the viewer would expect and other times subverting those expectations by shifting perspectives and transforming the space itself. All this builds that sense of uncertainty and the underlying feeling that this is part of something larger and stranger.

Challenges: Glass is an inherently difficult material to work with in film—and that goes double for computer graphics (CG). Not only are there a million tiny details to get right to make glass look convincing in CG, but there are still all of the traditional challenges of lighting glass, wrangling reflections and art directing such a mercurial substance. To top it all off, the computing power required to render all the reflections and refractions in glass is truly impressive. To meet the challenge, our CG team engaged in an extensive research and development process on two fronts: establishing the techniques and parameters that would enable us to be creative in directing the glass and building the pipeline to facilitate the rendering and compositing of such intricately layered shots.

Favorite details: The way that the artists found opportunities to say two things at once in shots, often with the shift of the camera’s perspective, is brilliant. Also, it’s very subtle, but there is a slightly unsettling effect in some of the typography itself—you may not know you saw it, but it’s there. I love including details like that.

New lessons: Every project is a chance to learn something new. With this one, we learned a lot about designing in transparent spaces and how to think about optical illusions in actual, three-dimensional space.

Visual influences: A big influence in thinking through optical illusions and the surreal is, of course, M.C. Escher. A less-expected influence is artist and sculptor Do Ho Suh; his New York Apartment installation has a haunting, graphic quality in the layering of transparent polyester that found its way into our thinking about space.

Click on an image to view more from each project 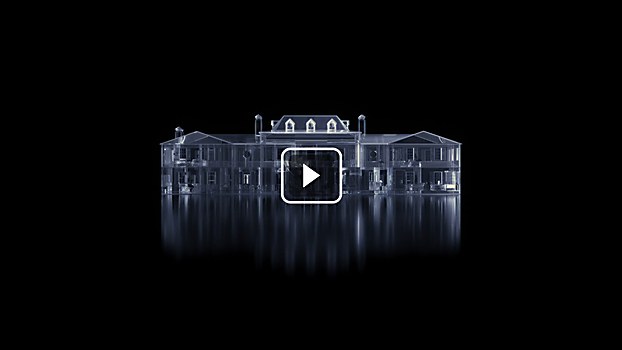